Ever since I first saw the 3Doodler show up on Kickstarter, I have been fascinated with 3D pens. These devices promised to open up a new world of creative possibilities to our students. Demo pictures and videos showed 3D bicycles, Eiffel Towers, unicorns, and more, all created with ease by simply drawing…up.  Well, fast-forward a few years and I will testify that either professional artists were at work making everything look so magically simple, or else I am just very inept. Even so, they continue to amaze and inspire my curiosity and creativity, and I am placing them in all of our elementary campuses, 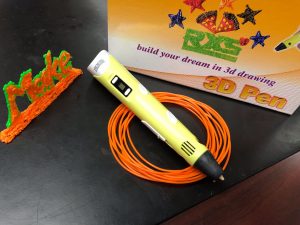 Today, you can find literally hundreds of different sizes and shapes of 3D pens. While the earliest models ran well over $100, the newest are as inexpensive as $8.  After looking at several review sites and customer reviews, I decided upon the RXS 3D Pen for our elementary maker spaces. The RXS runs around $30, and is one of a big family of clone devices, as one manufacturer apparently supplies a few dozen companies. The large number of reviews and low price would seem to indicate that this is a popular model for the casual hobbyist.

The RXS has some nice features worth noting:

I have honestly not encountered any major issues with the pen, which is a very pleasant surprise given the low price point. The only cautions are the strong fumes given off by the included ABS filaments do require ventilation or an outside workspace, and the tip does get very, very hot, meaning students might be wise to wear gloves. 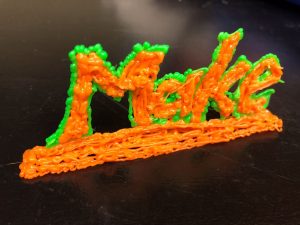 Overall, while my skills are still questionable (as evidenced to the right), I really like this pen. It is a bargain investment that promises to inspire some very exciting creations!