My son, Reilly, is a fairly typical 11-year old. He is into Pokemon, his Xbox, iPads, and sees school as valuable because it connects him to his friends and the library, but little else. It’s not that he is not a ravenous learner, mind you. Give him something challenging and interesting, and he is all in. It’s just that school is rarely either for him. He puts out the minimum effort he has to to make A’s, generally. At least to this point, he’s the polar opposite of my “valedictorian or bust” daughter, who applies laser focused effort no matter how mundane the school task.

If you want to see effort from Reilly, relevance and intrinsic motivation are where it’s at. For instance, he got engaged in an idea and ending up winning the award for the top 5th grade science project at his school this year. The project involved burning things and was completely his own invention. Fire and personal choice. Can’t miss. 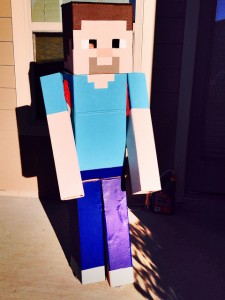 For consistent apex effort, though, you need to observe him working with and learning about Minecraft in all of its 8-bit, retro graphic beauty. His teachers would be insanely jealous. If allowed, he will spend hours researching, studying, creating, re-creating, collaborating, and communicating with, in, and about Minecraft. On occasion, I have been known to sit down and play Minecraft with Reilly. I tell people that the conversations go something like this:

Reilly: “Awesome, daddy! I made a city with a solar-powered, aerial tram system that is activated by this pressure plate inside the passenger cars. Each tram station also has an anti-creeper and zombie, redstone-powered security system and is designed to look like a natural part of the landscape and have zero carbon footprint.”

Me: “My house has windows.”

So last night I went into the living room to watch him play. He was in creative mode (meaning limitless resources, and you can fly) in an online Minecraft server. The last time I checked his game out a few days prior, he was creating a house he described as a “modern design”. Frank Lloyd Wright would have approved of the glass and lines, the big-screen television, the modular sofa, and the ground-level bed. He had since finished the 3-story house using blueprints found only in his mind and helpful tips from another community member whose structures Reilly had admired.

His next project was astounding to me. He had created an underground shop next to his house. Inside, visitors could find a collection of amazing and creative Minecraft character heads (Reilly referred to his store as a “head shop”. I internally giggled and decided that was some learning that could wait for much later.). There were at least 40 varieties of heads, as I recall. Visiting Minecrafters were actively browsing the store as I watched. Reilly had set up a brilliant system for visitors to order their own Minecraft heads:

He explained that he could charge something like silver or gold or diamonds, but prefered to give the heads away for everyone else to enjoy. A “customer” messaged him as I watched and invited Reilly to visit his Minecraft home to see the collection on display. Reilly obliged and gave the inquisitive and grateful user a few tips on how to “rank up” before returning to his virtual home. 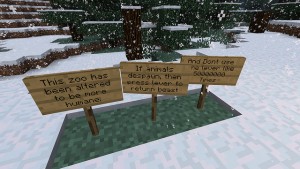 After dealing with several visitors back at the store, Reilly decided to post instructions on his shop wall, telling visitors how to make their own free copies using a combination of keyboard keys and mouse buttons. This would allow users to enjoy their own heads even while he was offline. It was a hoot watching him direct a pixelated customer over to the instructions, see the character reading them, and then heading over to copy a couple dozen varieties of heads.

If we don’t pay attention, we might miss all of the value here. Reilly created, he applied economic principles, he collaborated. He solved problems, designed, and redesigned (He tore the modern house apart numerous times as I watched, meticulously trying to get it just right.). He showed initiative in seeking knowledge from experts and shared his knowledge freely with other learners. He was organized, open to criticism, and willing to make mistakes. He demonstrated patience with others and their myriad questions and generosity with his resources. I observed him engaging in communication, science, art, and math.

The School Is Flat

We held our convocation last week, which focused on 21st century teaching and learning. Aside from some complaints about the length (We have been spoiled by getting released by 11:00 for a leisurely lunch in the past–this year’s went closer to noon.), I’ve heard numerous positive comments about the subject matter and productive discussions about how to turn the vision into reality. I am very optimistic that more and more students and teachers will be engaging in authentic, relevant, technology-rich classrooms this year.

I had a role in convocation this year for the first time. I was called to a planning meeting a week before the event and asked to assist. My task included creating a video with 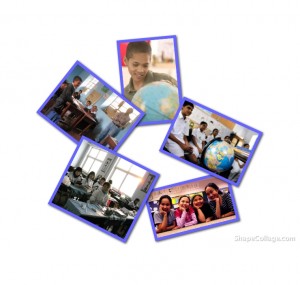 students/teachers talking about 21st century learning they had engaged in during the past year, creating a short Polleverywhere quiz about technology and society, and finding a few folks to connect to via Skype to demonstrate how educating our students is a global matter. While this was quite a set of tasks to accomplish in a week (one when students were still out on vacation), it was interesting and amazing that the last, the Skype connection, was probably the easiest. I simply reached out to educators who I had initially come to know via Twitter, asked them to share how students in their parts of the planet were learning 21st century skills, and set up the times to connect. We connected to Jeff Utecht in Bangkok, Thailand, and Sue Waters in Perth, Australia. Both were amazing (despite technical issues on my side–never fails).

Reflect on this for a moment! These are educators I have had the distinct privilege of meeting in person, but only after establishing a relationship through Twitter and Edublogs (Sue is THE go-to person at Edublogs.). A decade ago, I essentially collaborated only with the teacher next door, and my professional acquaintances were primarily limited to the educators in my building. As recently as 4 or 5 years ago, I would have not known either Sue or Jeff if I bumped into them on the street. Now, they are not only people whose ideas and insight I value, but who I can call upon on short notice and have them share their great minds with our educators, despite being separated by thousands of miles! This is the power of today’s technologies. It isn’t about electronic textbooks, interactive whiteboards, iPods, or any other device. It’s about the connections, the relationships, and the collaborations that are possible. It is about viewing the education of our students as a collaborative effort involving the entire global education community, not the teacher isolated in his room. I know I am a better educator because of my relationships with Jeff, Sue, and the hundreds of other dedicated educators I’ve connected with through Twitter, blogs, social networks, and other technologies.

If you are an educator who has never attempted to use any of these technologies, or one who has tried but not persevered, I cannot encourage you enough to jump in and begin to get connected. Twitter is a fantastic place to start, and there are numerous catalogs of educators to begin building your community (e.g. Twitter4teachers). All it takes is finding a few similar teachers to follow, engaging them in conversation, and sharing your thoughts, questions, and ideas. Blogs, education social networks on sites such as Ning are also fantastic tools for building collegial relationships.

Teaching is a noble call that suffers when we practice in isolation and flourishes when we work together, and at no time in history have we had the tools we do today that allow us to work together for the good of our children. When we take the time to learn and embrace these tools, we grow as professionals–I can testify to that wholeheartedly.

I’ve updated my introduction to Web 2.0 handout and wanted to share it here. Feel free to download, modify, and use it as you see fit.

Google is almost universally known for its powerful search tool (Okay, I realize some intelligent life in another galaxy may not know about Google yet, but I’m sure they are working on that.). And it’s fair to say that the numbers of users of Google Maps, Reader, and Gmail is certainly vast and continues to grow. However, if you have never taken the time to explore beyond these wonderful tools, however, it is certainly worth the time. Google continues to innovate, and there is an incredible array of tools that have potential for the curriculum. The following is a sampling of Google resources that are a good place to start your exploration.

A Day With Heidi Hayes Jacobs

Spent the day today at Richland High School listening to Dr. Heidi Hayes Jacobs. It was a very exciting opportunity and a fantastic chance for many of our district’s teachers and administrators to hear something that needs to be heard: we MUST refocus our curriculum and practices to meet the needs of students is a world that is nothing like that in which the teachers were raised. The live blog is below, but I’ll likely be following up with greater analysis.

Session Discussion Wall (I will try to address any questions as soon as possible!)

Please prove that you are not a robot.

Powered by WordPress | Hosted by Edublogs | Protected by CloudFlare