The Evolution of Digital Citizenship

Other topics? Leave them in the comments below!

Listen to “#34: The Evolution of Digital Citizenship” on Spreaker.

The 2016 Election and Information Literacy

Wow, what a year! This year’s presidential campaign was simply…indescribable. Among the highs and (many) lows this time around, the election results have produced an interesting and important dialogue that relates to our work as educators. Social media companies, Facebook in particular, have come under substantial scrutiny because of the proliferation of “fake news” stories on their platforms and the potential impacts these stories may or may not have had on the outcome of the election. Here are a few examples: 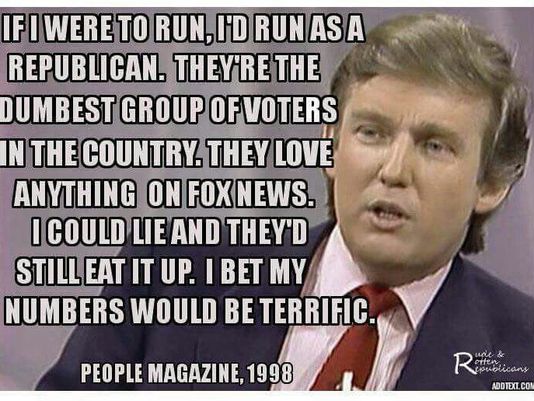 Trump duped the GOP–egads! Trouble is, there is no record of this statement ever being made…to People magazine or anyone else. That didn’t stop it from spreading like wildfire among upset Hillary Clinton voters in the past 2 weeks, though. 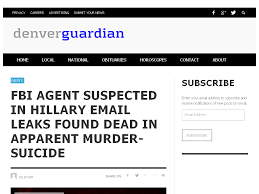 The Clinton dynasty crushes dissent once again. Not so much. The Denver Guardian sounds like a legitimate news organization. It isn’t, and neither is the story.  Regardless, it made the rounds among Trump supporters. 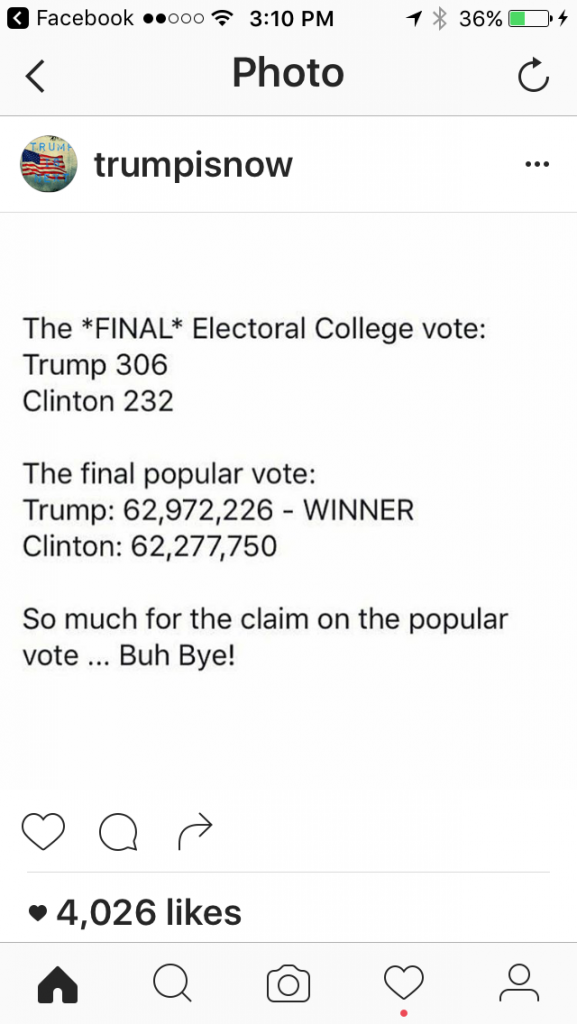 This one showed up just today in my Facebook feed. Besides being pointless, the data is completely and entirely fabricated, something the original poster refers to as “projected”. Besides, the electoral vote is not “final” until January 6.

These are just a couple of examples of fake news stories that ran absolutely rampant, often picking up hundreds of thousands of shares and millions of likes. Whether or not they influenced the results will continue to be debated. However, if I was a librarian, a history teacher, or anyone teaching research skills, I would find a way to leverage this discussion into a life lesson about being a discerning and skeptical consumer of information and a person who engages in fact-checking of “breaking news”, particularly the kind that evokes such passionate, emotional, and important responses. I might start such a lesson this way:

The incredible abundance of information available to us today comes with an important caveat. For all the helpful and accurate information that exists, there is at least that much that is less accurate or even purposefully misleading. It’s not just the internet, either. The media, politicians, unions, even schools make heavy use of data and information that supports their goals and ideals. A critical skill is the ability to look carefully at the reams of data and information that comes our way and be able to see biases, misinformation, correlations that don’t make sense, etc. In other words, to be information literate. There are a number of well-established internet resources that are helpful tools for teaching information literacy. The Pacific Tree Octopus, with it’s convincing testimonials and archival images, is a great conversation starter. All About Explorers poses as a legitimate page about world explorers of the past, but it is filled with often hilarious bits of information such as the statement that William Clark “…when he was 9, Clark was in fact reprimanded by Lewis’s father regarding a suspicious pile of watermelon seeds near the Lewis’s yard gnome.” Students can spend hours dissecting the site’s “facts” and figures.

Add the new site, Spurious Correlations to the toolbox. A law student at Harvard designed the site to teach people about statistics. Specifically, it is a lesson in the concept, “Correlation does not equal causation.” The graph from the site below shows the shocking correlation between cheese and engineering PhDs.

I was also surprised to know that precipitation in Texas is linked to the number of female editors at the Harvard Law Review.  Note to Harvard: Hire more women editors–we need the rain!

This type of data could be used as a part of a series of mini-lessons on information literacy. Students could argue the validity of any correlations, then conduct tests or research to determine whether or not the two are related events. It could also be a part of a writing activity on persuasive writing.

What are your thoughts? Are there other resources you are using to promote this type of critical thinking? Love to hear from you!